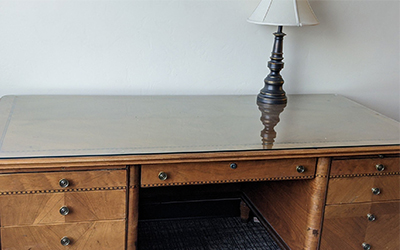 As the new County Attorney, I’d like to provide the community with an update each Friday, to the best of my ability, on the week’s activities. The data of this Office is the People’s data, and I look forward to doing my best to make it so.

This week marked the arrival of the new Senior Leadership Team, serving with the first County Attorney to take over the Office from outside the agency since 1972. To that end, on Day One, in a small out-of-the-way office, a beautifully preserved desk was discovered; indeed, it was Senator Dennis DeConcini’s desk, from his time as Pima County Attorney. He was the last candidate to run for Office from out in private practice, as I did so 48 years later.

This week we announced the first priorities for how to safely, responsibly, and meaningfully usher in criminal justice reform to Pima County. Hard work is underway on introducing a restorative justice program; reforming how our Office handles cash bail; setting the first Office-wide training on immigration consequences for the end of the month; and growing a dedicated Fraud Unit and a more robust Conviction and Sentence Integrity Unit.

With the County Attorney’s broad discretion, some steps were relatively easy. In the arena of cash bail, on the other hand, a behemoth community-wide effort will be required in order to wean ourselves off justice’s uncomfortable relationship with cash. However, in the meantime, I can say that has partnered with our deputies at eight of 10 initial appearances, we managed to hold people to prevent the ongoing threat, and we also managed to release people who were arrested based on non-dangerous accusations instead of holding them on low cash bail.

Importantly, now that I can finally enter the 21-floor Legal Services Building, I am amazed, inspired, and excited about the good people working there under very difficult conditions. Making their working lives better, especially during Covid, is going to be a Herculean task. I can’t believe I’m so lucky to take a run at it.